Anabel Lisette of the House of Devereux (9th of Tobias' Bounty, 1691–14th of Owyn’s Flame, 1731), briefly titled Anabel I, was a Curonian-born princess, later becoming an Imperial princess and Duchess of Cascadia upon marrying Prince Romulus, Duke of Cascadia. She would bear many titles throughout her lifetime, going on to become Empress-Mother of the Empire of Renatus, and later of Oren as mother to Godfrey II, Holy Orenian Emperor and John VII, Holy Orenian Emperor. Anabel was shortly declared as the lawful Queen of Curonia, though only serving in such a position for two years.

Anabel Devereux was born within the Curonian capital of Cyrilsburg, the first daughter to the then Count Wilhelm I of Curonia, and his consort, Evelyn of Istria. Being the third born child of the pair, and first daughter, her birth was widely celebrated by the people of Curonia. Shortly after her birth the County was elevated to ducal status.

Young Anabel was beloved by her father especially, and it is said that during one of the royal court sessions the Duke brought his daughter up upon the dias, declaring to his subjects that she was the most beautiful girl in the entirety of the land. It was around the age of six in which she was assigned a personal guard, Ser Graham Milner, who would eventually go on to become a mentor figure for the young noblewoman.

The Gentlemen’s War, known at the time as the Adrian-Curonian war, would prove to be the first instance in which Anabel’s future marriage would be brought into question. Following the apparent insults thrown between the Adrian Duke Rabitor and her father Wilhelm, Curon were delivered a list of demands alongside a threat of warfare if they were not fulfilled. Among these demands was the betrothal of Anabel to the Duke’s firstborn son and heir, Paul Carrion. These demands were outright refused by the Curonian council, with much uproar from the citizens as to the claiming of the eight year old Anabel. After a speech in which Wilhelm publicly condemned the Adrians, a state of warfare was declared. The Emperor Augustus called the two parties into an imperial court session, where it was then decided that a scheduled battle would take place and that no aggression was to be shown outside of said battle. Much to Anabel’s relief, Curon achieved a stunning victory within the field battle, thus ending the petty war and all talks of her marriage to the Carrion lordling. 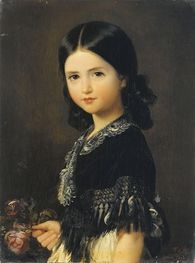 A Royal Portrait of Anabel Devereux, circa 1701

Following the substantial victory over the Adrians, it was declared by Emperor Augustus that the Duchy of Curon would ascend to the Kingdom of Curonia, a reward for their continued devout fealty to the Imperial Crown. A coronation was held in the winter months of 1703 within the Cyrilsburg Cathedral, masses of attendees travelling from all states of the Empire to watch the new Kingdom rise. As a first born daughter of the King, Anabel was bestowed the honorary title of Princess Royal, to which she accepted with a bout of enthusiasm.

It was during a Haeseni ball in which she first made acquaintance with the Imperial Prince Romulus Horen, the second born son of Emperor Augustus I. The pair would continue to grow closer as the years progressed, with their relationship had catching the eye of Romulus’ mother, Empress Helen Horen. She arranged a meeting with Anabel’s mother, Queen Evelyn, in which she brought forward the idea of a formal betrothal of their two children. It was then decided at that point for Anabel to take residency within the new capital of Helena, allowing her to learn the Imperial way of life as well as further her courtship with Romulus.

Romulus and Anabel were wed three years later on the 4th of Tobias’ bounty, 1706. They recited their vows within the Cathedral of Helena, and the ceremony was officiated by the High Pontiff of the time, Daniel I. She wore a dress of a grand nature, modelled after her Mother’s own, with brilliantly intricate gold detailing across the corset and skirt. Anabel was the first of her house to hold an Imperial title, and took such a position with pride.

The marriage was one of a very happy nature, with the two being incredibly devout in their vows. Shortly after the wedding, Romulus’ father Augustus I abdicated the throne, with his eldest son Antonius rising to the title of Emperor. In his long, and notably controversial letter of abdication, Augustus left Romulus the titular Duchy of Cascadia, making Anabel the Duchess-Consort as his wife. Romulus then decided that he would step back from the intricacies of Imperial politics, and instead take upon land to build his duchy. He and Anabel began to draft plans, enlisting architects from around the Empire to aid in their grand designs.

However their plans were cut short upon the alleged assassination of Romulus, three years into their marriage. This led the distraught seventeen year old Anabel to flee from the capital, fearing for her own safety, as well as harbouring mistrust toward much of the empire. The details of his murder were warped, and never quite presented to her fully, though she expected foul play on Antonius’ behalf due to a stirring movement to place Romulus on the throne over his cruel-natured brother. Anabel once again took residency within her father’s court, and was warmly welcomed back by her people, many taking pity on the young widow. She was deeply upset by the death of her husband, and supposedly sobbed for hours within the arms of her guard, Ser Milner. As an eligible maiden once again, her previous marriage remaining unconsummated due to the couples young age, many began to vie for the affections of the princess. Ana politely refused all advances, still in a deep state of mourning for her late husband.

She took upon a life of a more quiet nature, founding the Curonian Royal Academy within Avalain, in hopes to educate the youth of the Kingdom. Her allegiances were tested following the Coup of Avalain, in which her brother Ecbert deposed the newly crowned King Jarrack. She disproved of Jarrack’s rule, however could not deny that it was his birthright to hold the throne, and thus refused to support Ecbert’s cause.

After a number of years of absence under the pretence of death, Romulus reappeared in court. He claimed that after an attempted assassination, his brother had allowed him to live, though banishing the prince to the continent of Aeldin. Anabel regarded such a claim with suspicion, though quickly relapsed into the joy she had felt during their marriage. She moved back to Helena, alongside Romulus, the two soon bearing a child - her first son, Remus. They later sired a set of twins, their final children, Achilius and Lorena Julia of Cascadia.

It was at the dawn of the War of Two Emperors that Anabel's young son, Remus, was crowned as Emperor of the Empire of Renatus. This naturally set a course of action unpredicted by the princess. Curonia, currently under the regency of her elder brother Ecbert, declared allegiance of the rebelling vassals- being that of Haense and Leuven. This decision eventually led to the apparent suicide of her Father, due to his conflicting allegiances as both a previous Curonian King and the current Imperial Arch-Chancellor. Her mother, distraught by Wilhelm’s death, proceeded to throw herself into a pit of flames during his funeral, witnessed by Anabel and her immediate family. This was deeply disturbing to her, and fuelled a strong resent toward the regime of Ecbert.

Torn between her siblings and kingdom, and that of her husband and children- Anabel chose to stand beside her son and newly-crowned emperor Godfrey. Devoted to the Renatian cause, she publicly condemned the Curonian people for their choices to side against them, even going as far as to manipulate Ecbert’s wife into digging tunnels to allow Renatian raiders into the Avalain city walls. Her efforts during the war granted her the title of a Draughtsman of Renatus.

On the 15th of Tobias’ Bounty, 1715, the Renatian Imperial crown, specifically that of Emperor Godfrey, declared Anabel as the rightful Queen of Curonia, issuing her the title within an official Imperial document as well as banishing all other members of the Devereux family. This had come due to Curonia's missive condemning the House of the Pertinaxi and the further Renatian Empire. In response, the Curonian Regent Ecbert Devereux, on behalf of the young king Alfred, issued a declaration of disownment toward Anabel- in their eyes stripping her of her name, house, and titles. She responded to this in a flurry of anger, incredibly frustrated with the insulting declaration, having served the Curonian crown faithfully for many years.

The Renatian Imperial crown did not recognise this disownment as legitimate, due to the prior made banishment of all Devereux kin except for Anabel. She continued to be regarded as the Curonian Queen by those of Renatus, even beginning to wear a golden crown, laden with emerald jewels. Though a position she was not born to inherit, Anabel took it upon with grace, seeing herself as above the rest of her household, and thus worthy of the title. In 1717, Curonia declared allegiance to Renatus, claiming issues surrounding failed promises of independence from Oren. In turn, Renatus had offered a pact detailing full independence of the Kingdom. The title was given back to the legitimate King Alfred II, with the council operating a regency after Ecbert Devereux's death. This news was met with slight displeasure from Anabel, however she acknowledged that the crown should rightfully fall to Alfred according to the Curonian laws of succession

After a victory across the Siege of Helena and following battles, the rebelling Orenian alliance began to deteriorate. They soon crumbled, with Ves declaring allegiance to Renatus, and the sights of war being turned solely on Haense. Months of negotiation eventually led to a treaty between Haense and the Empire. Anabel’s son Godfrey soon took to Aeldin, meeting with the Renatian founders, and declaring the dissolvement of Renatus, and his reformation of the Holy Orenian Empire. Following the dissolution of House Horen as decreed by His Imperial Majesty, Godfrey II, in 1721, Anabel was no longer regarded as a Horen, taking on the family name of Cascadia in its place. She took upon the privy position of Minister of Foreign affairs soon after.

Anabel would live to see both of her sons ascend as Emperors, following the abdication of her firstborn, Godfrey, to his younger brother Achilius. Achilius' (Then being regally named John VII) reign was short-lived, plagued with a weak empire and administration. Only three months following his coronation, he erupted into a fit of stress induced madness, declaring Oren as an elective democracy. Soon after, he abdicated his titles, fleeing Helena- never to be heard from again.

With her husband Romulus perishing during the subsequent Helenic throne room skirmishes, a distraught Anabel remained by her only daughter's side- the last two remaining members of the house of Cascadia. Together they fled to Curonia once again, welcomed warmly by their Devereux kin.

Anabel would reside within Curonia's walls for the remainder of her life, tending to basic affairs of state under the reign of Pierce I of Curonia. At the age of 40, she'd succumb to an illness, commonly thought to be a residing pain felt from the death of Romulus, and the dissappearance of her two sons. Her daughter would later marry Emperor Peter III, becoming the Empress-Consort. Thus, all three of Anabel's children reigned as an Emperor in their own right, or as a consort

Full Title as Queen of Curonia